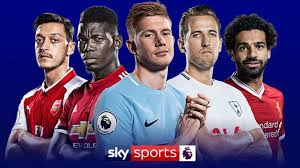 As we near the Christmas period the premier league has continued to provide some stunning entertainment for fans. The Genting sports app makes the defending champions Manchester City the short odds on favourites to do it again. This is no surprise as they ominously look to have improved even further this season. This was again shown as they put on a clinic in the Manchester derby most recently, dominating United to win comfortably by 3-1.

There nearest challengers in both the league and betting are Liverpool, who have been on an upward curve in recent seasons. This was shown in their run to last seasons champions league final before being defeated by Real Madrid. They have one of the most dangerous attacking lines in world football, which was why they were being muted pre season as the big threat to City.

12 games in and Manchester City already have amassed 32 points with ten wins and two draws. This is also backed with an incredible goal difference of plus 31, having scored 36 goals and conceded just five. Liverpool are also unbeaten with 30 points, having won nine games and drew three. They have also conceded just five premier league goals so far but scored 23 putting them on plus 18-goal difference. Both sides are on a remarkable run of form as they continue to dual at the top of the table.

Is it just a two-team race? Chelsea are the only other side yet to taste defeat in the premier league. They currently sit in third and just four points off the top, with a point’s total of 28. This is due to them having won eight of their twelve games. They were held most recently to a 0-0 draw with Everton, who themselves continue to go from strength to strength. Chelsea have transformed their style of play and are a very difficult team to break down, which is why they have conceded so little goals. There passing football under the new manager has enabled them to challenge for the league again so could they surprise the top two?

The other sides in the reckoning are London rivals Tottenham and Arsenal.  Spurs are going through a difficult period with the wait for the new stadium, which now seems it could go on until next season. Arsenal have transformed under Emery following their opening defeats to the league. They are now on an unbeaten run of 16 matches without defeat in all competitions. This all sets up for a fascinating season ahead in not only the title but for the coveted champions league spots.