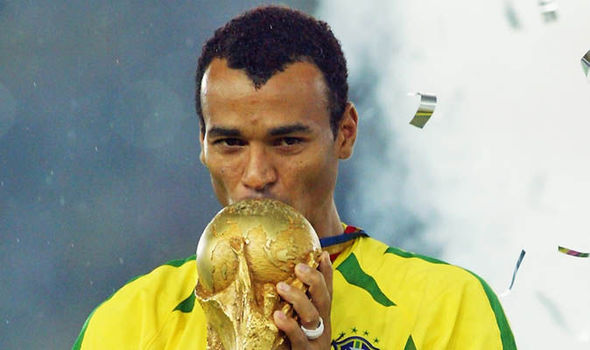 Having read the review of world Righ Backs on the Bleacher Report we has FQ thought we would add our views on the matter.

The Right Back position is a vital cog on the football pitch. Not only does it provide cover from attack from the wings, meaning the player has to defensively sound, but it serves as a base for extra attacking menace. Which players have achieved success in this position and who can be considered as amongst the finest to lace up the boots and play right back. Here we take a look at the top 5 Right Backs of all time…..

A vital cog in the successful Manchester United team of the 1990s and an ever present in the English national team Gary Neville was not only the perfect professional role model, but is also pretty much a perfect Right Back. Termed “Mr Reliable” Neville was a tough man to beat with pristine tackling, pace, tactical awareness, positional genius and above all else a will to win. For his size he also won more headers than he should have and teams found little joy trying to break him down.

Neville also provided a threat going forward with a pace, tactical knowledge like he could master classic casino slot games and crossing ability most right backs lack. The relationship he built up with David Beckham served club and country proud. Alex Ferguson nurtured Neville throughout his career and he rose to Captain the team playing 5656 matches, winning 7 Premier League titles, 3 FA Cups and the Champions League. Combined with 85 England caps there was no finer player of his generation in the Right Back position.

Not a name many people would instantly think of when trying to rack up a list of the finest right backs in the history of the game, but Wim Suurbier is worth his place on any ranking. Wim Suurbier playing in the Netherlands team that gave the world “Total Football” and alongside the other famous names he was a consistent presence in one of the finest national teams ever to grace the planet.

Wim Suurbier is remembered for his blistering pace making him hard to beat and a potent attacking force but he also had great stamina and kept going full pelt from the first minute to the last. As a last line of defence he could catch the quickest of strikers and used his tackling prowess to keep the defence solid.

At club level Wim Suurbier was also part of the famous 1970s Ajax Team that won 7 league titles and most memorably 3 European Cups. Wim Suurbier is a name every Dutch fan remembers and is worthy of his place as one of the finest Right Backs of all time. In his spare time he was an avid play real pokies online player becoming a Dutch Master in his time.

Pub quiz veterans are more likely to know the name Jose Nasazzi than the average football fan. This is down to the fact that he was the first person to lift the world cup trophy as a winning captain when he did so for Uruguay in 1930.  The success of a truly great player can be measured in success and in terms of honours Jose Nasazzi ranks amongst the greatest right backs. Not only did he win the world cup against all odds, but he won 2 Olympic Gold Medals and also 3 Copa America titles.

By all accounts Jose Nasazzi was a tough, no nonsense and tough tackling player who took no prisoners. In the days before the right back position becoming an attacking threat, Jose Nasazzi defended his line and was rarely beaten. One of the star players of the 1930 World Cup his drive and ambition led Uruguay to the title and as a captain and leader he inspired a generation.

Carlos Alberto Torres is a name every fan would expect to see on this list. He revolutionised the position of Right Back in the Brazilian team that dominated the 1970s. He proved how the position could be used as an attacking threat and scored goals unlike any player in the position before him. In 1970 he captained the Brazilian side to World Cup Victory and the fact that he captained that team, packed with stars, is testament to his quality and leadership skills. In 2000, a FIFA poll ranked him as the finest Right Back of all time which is tough to argue with.

His pace, scoring ability and passing range made him a crucial cog in the team that included Pele, Gerson and Rivelino. His pace made him difficult to beat and his all round skill earns him a place amongst the all time greats.

Oh and of course…..there is THAT goal.

Cafu was one of the most recognisable faces in World Football for much of his 15 year career in the game..Quite an achievement for a Right Back. He is the most capped Brazilian of all time making over 143 appearances for the national side and at the age of 39 was still playing for AC Milan in the Champions League.

Cafu was a potent threat going forward and his powerful engine meant he could patrol the right wing from the first minute to the ninetieth. He was fast, agile and powerful meaning he was tough to knock of the ball and tough to get past. He took no prisoners but his impeccable timing for tackling meant he usually won the ball without fuss! He dominated aerial battles and used his pace and passing ability to be an attacking force in the national and club game.

In 1994 he was named as South American footballer of the year, the same year he won the World Cup, a feat he would repeat in 2002, all the more impressive after the disappointed of being involved in the disastrous 1998 final. 2 Series A titles, the Champions League and Cup Winners Cup…the list of accolades are endless.

If you are therefore searching for a Right Back who sums up the modern game…powerful, pacey, defensively sound, attackingly potent then look no further than Cafu.